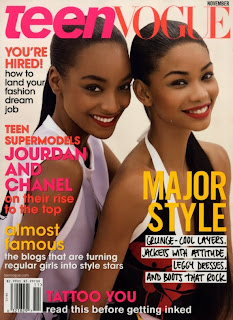 Photographed by Patrick Demarchelier, this is the first double cover for the two models. Jourdan was discovered in Primark store in 2006 by a Storm agent and signed with the major modelling agency soon afterwards. British Vogue named her as a "new star" and iIn 2008, she was the first black model to walk a Prada runway in over a decade. She has modelled in shows for Marc Jacobs and Polo Ralph Lauren and modelled for Gap, Topshop, Benetton and H&M to name just a few. 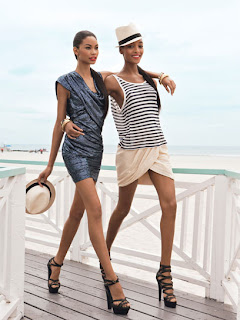 
Both Chanel and Jourdan have taken the model industry by storm. Not only because they are so young (both 19) but because they are both Black models. Chanel took part and won third place in Ford Model's Supermodel of the World in 2006 and signed up with the agency. She has modelled in shows for DKNY, Dolce and Gabbana, Diane von Fustenberg, Vera Wang, Stella McCartney and many more. At Milan Fashion Week Spring 2010 (held in September 2009) Chanel was booked for 9 major shows including big names such as Gucci and Versace with fashion critics calling it a resurgance of black models featured in Italian shows. 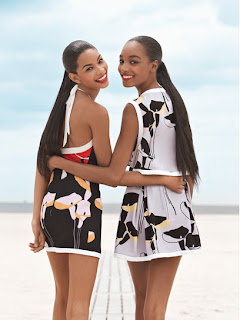 Here are some extracts from their interview...

Jourdan on Chanel "It's competition. There aren't a lot of us, but instead of sticking together, we're pitted against each other. People will say things in Chanel's ear like, 'Jourdan is taking your spot,' and then they'll say to me, 'Don't trust Chanel.'"

"I could sit here and tell you, 'I love Jourdan! We've always been the best of friends! But we haven't. Until recently, we barely even spoke. We went from being superclose in the beginning to dead silence if we saw each other backstage at a show. If we did say hi, it was hi, and that's it."

Jourdan , on the harsh realities of the industry:
"I remember last season I was about to go into a casting, and my agent phoned and said, 'Turn back. They decided they don't want any black models.' I was like, 'They're actually telling you that's the reason? Are you serious?!'"

Jourdan, on her unplanned pregnancy: "It was really hard. "All I could think about was what my mom was going to say, my agency, my boyfriend. When I told my mom, she started crying and blaming herself. She got pregnant with me at the same age, and she said, 'I don't want you to have to go through what I did.'"

Chanel, ON MOTHERHOOD: "No babies for me until I'm in my 30s! I'm focused on my career right now. I can't even take care of my dog."

Chanel, on the future:"I don't want to be known as the black model. I want to be recognized as Chanel Iman, a personality. Five years from now I see myself still working hard to get where I want to be, because I think big. I think the best. Maybe I think too large."