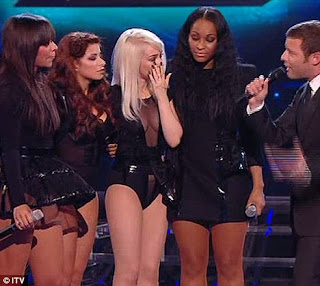 Kandy Rain, the former strippers were voted out of Xfactor on Saturday night. Are we really that surprised??

I have to admit, the girls were not the best singers on the night - but surely they were not the worst. Did anyone witness the awful performance by the twins Johnathon and Edward?? They were out of tune, out of breath and out of their depth. How much longer will they survive the public vote? If the majority of voters (young girls and women) have anything to do with it, then it looks like they are in the running to win the competition.

Which brings me to the reason why Kandy Rain were voted out first on the Xfactor. Girls vote, which means they will always support male groups and singers with the exception of very talented female singers (as proven by previous Xfactor winners Leona Lewis and Alexandra Burke).

However, girls will not vote for overtly sexy dressed young women - not to mention former strippers! There is a big difference between sexy and sleazy and the girls were very much on the verge of the verge. I couldn't decide whether Cheryl and Danni did them more harm than good when they told the girls to stop dressing sexy if they wanted to prove a point of changing the public's perception of them.

On one hand this advice is true: stop dressing provocatively if you want to gain the respect of audiences at home - especially the majority of voters in reality television shows - women. Cheryl mentioned the girls had spoken about wanting to move away from the "sexy stripper" persona they had been unfairly labelled with by the press.

Yet on the other hand, Simon did make a good point - which is that Cheryl, Dannii and other female performers dress just as provocative as the girls have and that both judges were in no position to judge. 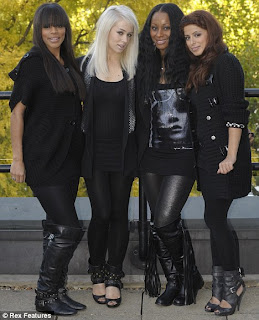 
Of course that would be the man's point of view - dress sexy because everyone else is doing it. What Simon failed to realise is that a) Cheryl, Dannii and other female artists ARE established and once they have gained their fans can take the risks of dressing more "provocatively" than a newer artist. And b) Cheryl, Dannii and other female artists have not had kiss and tell and other awful stories in the press sold about them regarding their stripper and playboy pasts.

So a lesson to Kandy Rain - if you want to keep their ultra sexy image then they are on the right path! But if they want to be more than the girls who were booted off first in the competition they will have to compromise and try harder at winning female fans.

If this means covering up, and taking more of a stand with their wardrobe then so be it. The girls can be sexy stunning minus the sleaze and tack and maybe, just maybe they it will be easier to shun the stripper tag they have been labelled with...

Posted by DoYouNoah at 18:17
Email ThisBlogThis!Share to TwitterShare to FacebookShare to Pinterest
Labels: results in, Xfactor