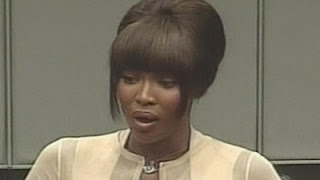 Naomi Campbell on trial
Supermodel, Naomi Campbell was summoned to court yesterday to testify over allegations she received “blood” diamonds from the ex Liberian Leader, Charles Taylor.
She claimed she no longer had them and they were donated to a charity run by former head, Mr Ractliffe. Though it was only today that Mr Ractliffe admitted he has been the owner of these “blood” diamonds for several years.
To sum up the story so far, it is alleged the British model received these diamonds from Charles in 1997 during a dinner party which she and the former Liberian leader attended hosted by Nelson Mandela.
Naomi said she was woken by two strangers in the middle of the night and given a pouch containing stones. She didn’t examine it until the next morning at breakfast with her ex agent, Carole White and the actress Mia Farrow.

The infamous dinner party hosted by Nelson Mandela
She admitted that the diamonds actually looked like “dirty rocks” rather than the diamonds she was used to receiving in a box, as these “rocks” were in a cloth pouch.
Naomi told the court that she handed the gems to a colleague and told him to “do something good with them”. She said she had wanted them to be donated to a charity. Naomi claimed that the diamonds were donated to Nelson Mandela Children’s Fund and given to the fund’s former head, Mr Ractliffe. The court was shown documents from the fund "categorically" stating that the charity had not received the diamonds, although records showed Campbell made cash donations to it in 1997 and 1998.
Yesterday a letter was presented in court by the defence from Nelson Mandela Children’s Fund said it had never received a diamond or diamonds from Ms Campbell or anyone else.
“The point I need to communicate today, on behalf of the board of trustees, is that the Nelson Mandela Children's Fund is not in receipt or possession of a diamond,” spokesman Oupa Ngwenya said. 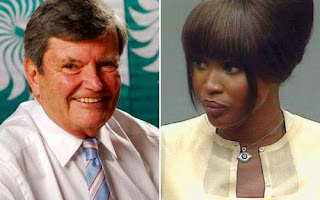 Jeremy Ractlilffe (l) and Naomi Campbell (r)
However SHOCKINGLY Mr Ractliffe has said he did in fact receive uncut diamonds from Naomi Campbell. He issued a statement after her testimony at the trial. Mr Ractliffe said he was happy to testify at the trial and had now handed the stones over to the authorities.
“Three small uncut diamonds were given to me by Naomi Campbell on the Blue Train on 26 September 1997,” he said in a statement sent to the BBC.
Mr Ractliffe, who is still a trustee of the fund, said he took the diamonds as he thought it might be illegal for her to take them out of the country. “In the end I decided I should just keep them,” he said.
So how did this story come to light? Actress, Mia Farrow started the allegations Naomi had these uncut “blood” diamonds, which will be used as evidence in Charles Taylor’s war crime trial. She claims Naomi had told her the “unforgettable story” about the gift over breakfast the next day. 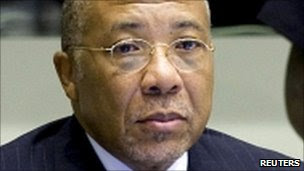 Charles Taylor on trial
“She told us she had been awakened in the night by knocking at her door. She opened the door to find two or three men - I do not recall how many - who presented her with a large diamond which they said was from Charles Taylor,” Mia Farrow said.
She and Naomi’s ex agent Carole White will testify next week…and the plot thickens!
♥
Posted by DoYouNoah at 14:42
Email ThisBlogThis!Share to TwitterShare to FacebookShare to Pinterest
Labels: celeb news, features