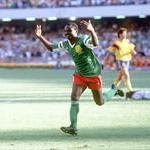 Roger Milla celebrating his goal
Only four days until the World Cup kicks off and everyone is going football crazy including me!
Have you ever wondered who started the celebration goal dance? No, not Peter Crouch! It was none other than  football legend, Roger Milla, the former Cameroonian striker.
He was one of the first African strikers to become an international star. But what he is most famous for is his celebration dance around the corner post each time he scored a goal.  It has become the most popular goal celebration ever since with players all around the world adopting their own signature dances.
Coca Cola has released this amazing advert paid honour to Roger Milla. It's so nice to see the player being honoured for his amazing football skills, talent and most importantly dancing!
Posted by DoYouNoah at 20:26
Email ThisBlogThis!Share to TwitterShare to FacebookShare to Pinterest
Labels: football, world cup