Carole Puts Her Foot In It 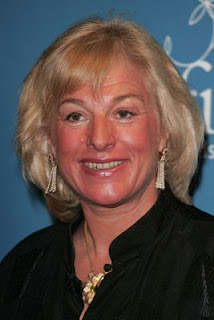 Carole Thatcher
Those people at the BBC just can't help themselves can they? Only a few weeks ago Chris Moyles was in the headlines for insulting Polish people and I don't have to mention the Ross/Russ gate scandal of 2008. So I wouldn't say I was "surprised" to hear that Carole "2005 Queen of the Jungle" Thatcher, daughter of Margaret Thather, has been banned from the BBC after muttering a hideously shocking and revolting racist remark.
The jungle winner made the remark whilst appearing on BBC's The One Show where she worked as a roving reporter. She refferred to a tennis player (who has not yet been named) as a "golliwog". 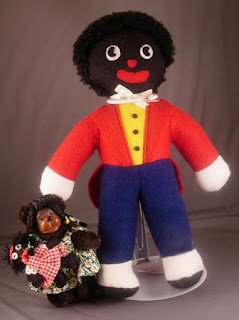 A "Golli"
For all those who are not aware of what a golliwog is, what they represent or even what they look like let me enlighten you with this enchanting bit of history... The Golliwog is a character created in the late 19th century by Florence Kate Upton. It was inspired by a blackface minstrel doll which Upton found as a child in her aunt's attic in North London. Throughout time it has been reproduced as a commercial toy for children coming in forms of a rag-doll, in children's books and cartoons. 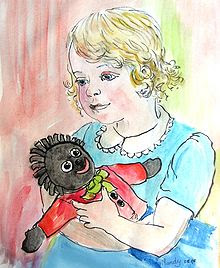 Georgie with Robert's old Wolly, pen and wash (2008)
Although considered as a "toy" to some consumers, the term "golliwog" is a racist term for black people. The Golliwog has a wide smile, big bulgy eyes, a wide nose and huge afro hair showing similarities to people who performed in Minstrel shows, which lamponned black people in various ways, as ignorant, lazy, buffonish, joyous and musical. 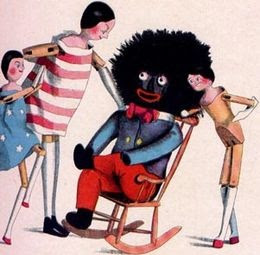 A Golliwog entertaining his audience
Carol’s spokeswoman says that it was an “off the cuff remark made in jest” and added that she’d since apologised verbally and in writing to the BBC. The BBC confirmed that they had “no plans to work with Carol on The One Show at the present time”, with a spokesman adding, “The BBC considers any language of a racist nature wholly unacceptable. This is not the only time the term "golliwog" has appeared to spark insult and debate within the media. 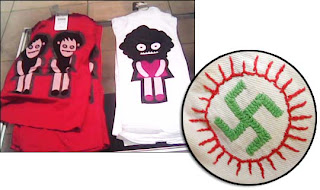 Zara fashion retailer's Golliwog T-shirts were removed from stores
So.... Was the BBC correct to ban Carole for using this remark? Should Golliwog still be considered an offensive word? Is everyone over-reacting? Let me know!
Posted by DoYouNoah at 16:28
Email ThisBlogThis!Share to TwitterShare to FacebookShare to Pinterest
Labels: carole thatcher, gollywog, Naomii Campbell, racism, Zara

Yes, everyone's over reacting.
People need to stop being so daft and look past the "secret offensive meanings" of these dolls and realise that they were just a children's toy!

Hi, regarding the swastika, its a shame because it was, prior to 1932, a symbol of good fortune and peace. For some reason it has some kind of attraction graphically (evident in the fact the nazi's chose it). It is now instantly regarded as an indicator of harbouring racist sentiment.


I ask because I'm a design student, and I was thinking of exploiting the graphic qualities in a sculpture/product. My tutor says go-ahead but I'd better be prepared for some flack.

I'm a fair-haired white person, but part jewish. I was wondering do you think that the use of these symbols (and even golliwogs) should be restricted absolutely, no arguement? or do you think these things can be used to make a point, perhaps in an artistic context, providing its sincere?

In response to the first comment, I don't believe it was "just" a children's toy.

Look beyond the image but instead the message it conveys, a toy that ridicules the appearance of an ethnic minority creating the perception of black people as stupid, unattractive and inferior to other races...would you really want your child to play with a toy like this fully knowing the meaning behind it? As adults, I hope that we can educate our children in knowing the difference between right and wrong and positive and negative images - though I doubt children would be able to distinguish between these differences.

In response to the second comment, I have mixed feelings using the swastika symbol. In your case, in a design piece to promote it's correct use (fortune and peace) then it is a great idea! Though, I am conscience that some people have the tendency to abuse this use and instead use words, references or symbols that are offensive to people as a form of "art", their reason to class this as "acceptable" i.e. the "N" word in music. It is not acceptable whether a black or white person uses it in music, amongst friends wherever, it is totally wrong.

So my answer is yes use the swastika in your design piece but be prepared to defend your work as despite wanting to use it solely as a piece of art, some people may take offence to it and for that you should be ready for the backlash...