Don't You HATE when this happens! 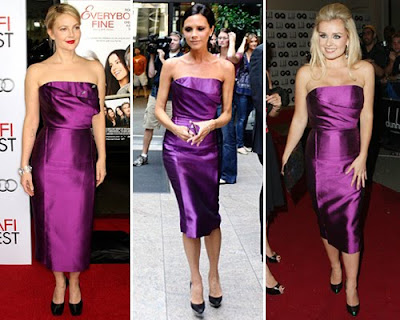 There is something that Victoria Beckham, Katherine Jenkins and Drew Barrymore have in common...they all wore the same dress! (But thankfully NOT at the same time!)

The Armani dress is priced at £1,750 was first worn by Victoria (no surprise there) in August followed by Katherine Jenkins a month ago and last but not least Drew Barrymore this week at her premiere of Everybody's Fine.

Who do you think rocks it best? I think the dress is awful, it has a very unflattering waist and the cut falls far too low below the knee making all three of the women look, well, extremely awkward in it.

However if I had to choose one it would be Victoria Beckham - she has obviously altered it to suit her (skinny) frame making the hem slightly shorter. Good choice!

Posted by DoYouNoah at 22:14
Email ThisBlogThis!Share to TwitterShare to FacebookShare to Pinterest
Labels: fashion