Rihanna Finally Speaks Out About THAT Incident... 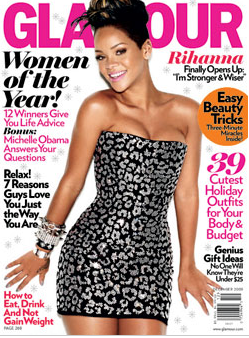 Rihanna on cover of Glamour magazine

It was going to happen sooner rather than later - and what better way to discuss the incident between Rihanna and Chris Brown than in a magazine interview.

The only surprising thing was her decision to go with Glamour - then again, she was awarded a Woman of the Year Award by the magazine so perhaps that helped her decision on choosing who to reveal all to...

I won't put in ALL the interview (you can go out and buy Glamour mag yourself!) but I will add in the most juicy parts.

I am so glad that Rihanna finally spoke out about the incident.  Not only is it a weight off her shoulders  (im sure) but I can bet thousands of her fans want to hear about what happened, how she is coping and her feelings towards domestic violence. 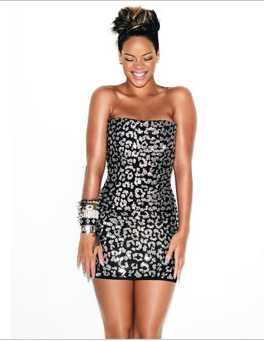 Glamour: Let’s talk about this past year—you’ve obviously been through some difficult things. How did the people around you help you cope?

Rihanna: My friends and family have been extremely supportive, and everyone has been there for me. But at some point you are there alone. It’s a lonely place to be—no one can understand. That’s when you get close to God.

Glamour: Are you referring to the [Chris Brown] incident?

Rihanna: I am talking about starting with the night [before] the Grammys and then on. That was not the only thing that occurred this year. The picture leaking…it was one thing after another.

Glamour: You’re talking about the photo [reportedly of Rihanna’s injured face taken by police after Brown assaulted her] that was allegedly leaked by cops. You handled that so well; you kept silent in the press.

Rihanna: It was humiliating; that is not a photo you would show to anybody. I felt completely taken advantage of. I felt like people were making it into a fun topic on the Internet, and it’s my life. I was disappointed, especially when I found out the photo was [supposedly leaked by] two women. 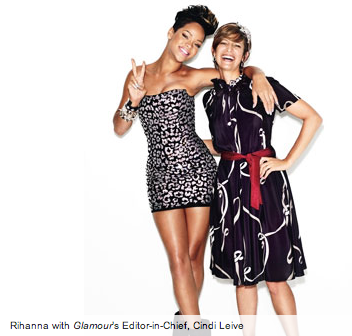 Glamour: How has this event changed you as a person, as a woman?

Rihanna: I’m stronger, wiser and more aware. You don’t realize how much your decisions affect people you don’t even know, like fans.

Glamour: Do you think you’ve gotten your strength from your mom?

Rihanna: Definitely. My mom gave us the tools to survive…. My parents separated when I was eight or nine. I helped her raise my [youngest] brother, because my mom was working all the time. He’s my favorite.

Glamour: Do you feel that this experience has laid the groundwork for coping with anything so public again?

Rihanna: It has taught me so much. I felt like I went to sleep as Rihanna and woke up as Britney Spears. That was the level of media chaos that happened the next day. It was like, What, there are helicopters circling my house? There are 100 people in my cul-de-sac? What do you mean, I can’t go back home? 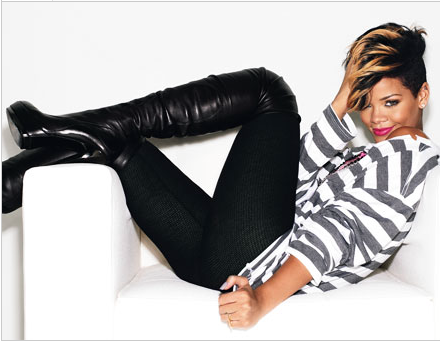 Glamour: If you could offer a message to the millions of young women who look up to you, what would you tell someone who found herself in a similar situation?

Rihanna: Domestic violence is a big secret. No kid goes around and lets people know their parents fight. Teenage girls can’t tell their parents that their boyfriend beat them up. You don’t dare let your neighbor know that you fight. It’s one of the things we [women] will hide, because it’s embarrassing. My story was broadcast all over the world for people to see, and they have followed every step of my recovery. The positive thing that has come out of my situation is that people can learn from that. I want to give as much insight as I can to young women, because I feel like I represent a voice that really isn’t heard. Now I can help speak for those women.

So what do you think of Rihanna's interview?

The Queen of Hearts said...

I think instead of being completely honest and owning the very private thing that happened to her, she's exploiting young women and the cause of domestic violence everywhere and I really don't like her for it. One minute its all about the impact she has on impressionable young women, and the next she's taking topless photographs for her album artwork and making videos with exploding bloody chests and her getting shot to death under water (not to mention a gentleman blowing his brains out). I'm sooo not interested in her.

You raised some good points thanxs 4your comment!The whole Chris/Rihanna saga is one big mess it'll be interesting to see how BOTH their careers end up after this whole drama...xoxo