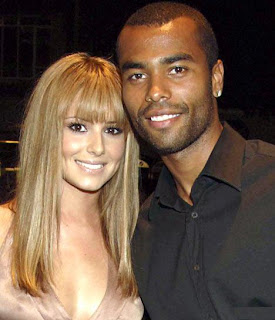 Cheryl & Ashley Cole in happier times...
Surprise suprise - Cheryl Cole announced today she's separating from her husband. Shocked? Nope, me neither!
After flying out to the US following all those tabloid tales about Ashley cheating on her, she flew back into the UK today announcing the heartbreaking news. 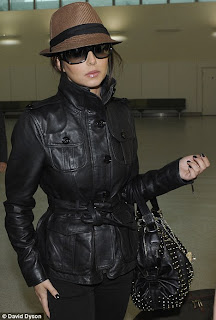 Chezza arriving at Heathrow today..♥ the bag Chez!
Her spokespeople released a statement to the press and on Twitter stating that "Cheryl Cole is separating from her husband Ashley Cole":- 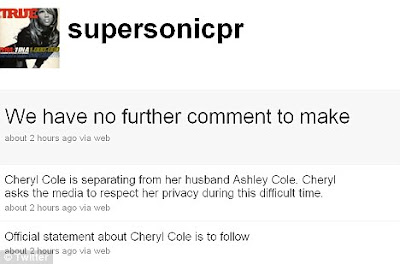 
The other four members of Girls Aloud are, "Supporting Cheryl in private".  Their spokesman added. Uh-huh...bet they knew all along!
The Coles met in 2004 and married two years later.  2008, was when the cracks started to appear when the first allegations of Ashley's infidelity emerged.
Despite all of that hoo-haa, Cheryl stood by her man, and what happens? More claims surrounding his cheating appear.  No wonder Cheryl jetted off to US to get away from it all. No surprising that she happened to be pictured with the US hotty, some American dancer called Derek Hough, who appears in the video for her latest single.  And who can blame her?

The dancer has apparently been "comforting" the popstar during her stay in the US...uh huh!


Her first single shouldn't have been called Fight for this love -  more like Quit fighting,I'm done!  Apart from marriage, there's nothing else holding Cheryl back.  She has no children with Ashley, she's young, beautiful, talented, has a successful career...the world is her oyster.  Why should she hang around with someone who (allegedly) has no respect for her to repeatedly cheat on her over and over and over and over again? 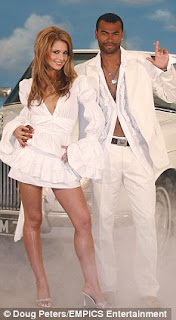 The couple on their ad campaign for National Lottery
..tacky much?!
They say once a cheat, always a cheat. I believe in second chances- EVERYONE deserves a second chance.  Everybody is human.  BUT (and that's a very very big BUT) when someone repeatedly cheats on you, how much longer can you put up with it?  Love? That's not love. As Rhi Rhi once said, "Love doesn't hurt" physically, nor should it hurt emotionally either.  It's a tough situation to be in as once the trust is broken within a relationship, it's very hard to mend.
Ashley, hope it was worth it...judging by these pics of the girls he allegedly cheated on Chezza with...I don't think so!)


"Men cheat for the same reason that dogs lick their balls... because they can" - Samantha, Sex & the City.

Posted by DoYouNoah at 19:58
Email ThisBlogThis!Share to TwitterShare to FacebookShare to Pinterest
Labels: cheaters, divorce