Peter Andre Breaks Down on TV... 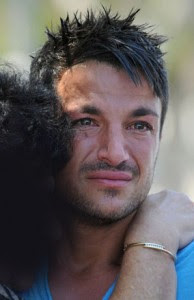 With news breaking out that Katie Price married Alex in Las Vegas, it was only a matter of time before Peter Andre was going to air his views on the matter...
Live on Sky News, Peter Andre broke down in tears during his interview.  The singer, who was already booked to appear and promote his new album became visably angry when asked by newsreader, Kay Burley, about Katie's decision to marry Alex Reid.
But it was the questions about his children that REALLY got to him.  Kay showed a videoclip of Katie's ex and father to Harvey, Dwight Yorke, saying that he was not happy that Peter wanted to adopt Harvey when they got married.
Kay then asked Peter how would he feel if Alex did the same and tried to adopt his children, now that Alex and Katie were married.  He exclaimed that nobody will takes his children from him.  And that's when the tears were released...*sob*
After a few seconds, Peter realized his emotions and apologized, saying that he didn’t expect those kinds of questions. When Kay tried to change the subject to his tour, he just told her that he didn’t want to talk anymore and requested the interview be over.
Were these tears brought on at the thought of having his children adopted by another man? Or perhaps the fact that Kay embarrassingly showed Peter up? If Peter could consider adopting Harvey then why couldn't Alex? Perfectly normal question to ask a man.  I mean, he HAS also considered this option himself hasn't he?
Hmmmm, interesting....thoughts!?  See for yourself below!

xoxo
Posted by DoYouNoah at 09:35
Email ThisBlogThis!Share to TwitterShare to FacebookShare to Pinterest
Labels: gossip, katie and peter, news