Fashion was always going to be on top of the list along with the performances of course!
Lady G showed off her ecentric style with a white tiered gown and towering wig - would we expect anything less from the Queen of Flamboyant herself?! I really liked her lace outfit; daring, revealing, sexy and not at all subtle, it showed off a sexy side to Lady Gaga. Not just crazy! 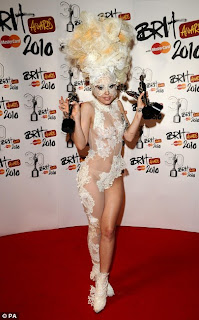 Lady Gaga at the Brits..♥ outfit on the left..not so much for outfit on the right!
Leona Lewis wore a William Tempest futuristic silver foil dress teamed with barbie pink shoes - I think the look just worked! Pixie Lott wasn't so daring and stuck to all black  Kate Halfpenny dress (bore!) with peep toe shoes which were very cute.  Out of the two, whose outfit would you have picked?


Courtney and Geri steered well away from black and kept it all beige and white on the night.  Geri wore  a lovely white dress and Courtney opted for, well a strange looking dress.  I don't care if its Miu Miu Courtney, that look is just WRONG.

There was more black on the red carpet with Kylie Minogue choosing a weird looking, gypsy style dress by Dolce & Gabanna. I like the long sleeves but the bottom half of the dress is just a bit too "gypsy/traveller" and not in a good way!!!  Lily wore a black Chanel gown (bore!) I know she's the new Chanel muse and all, but doesn't mean you must wear EVERYTHING chanel..especially if its not cute!

Kylie and Lily..both outfits thumbs down me thinks.. :-(
The Sugababes all teamed up in Moschino for the night. I loved Amelle shoes and Jade's silver heels were equally just as nice too! To be honest I wasn't keen on the dresses. Amelle's is nice for a club but not an awards ceremony..Jade's creamy wrappy dress just looks odd and Heidi's black dress is fine..for a cocktail party!  The cut-out sections on the side do try and make it "dressy" but it's just not "cutting" it!  Nice dresses girls, just wrong occasion.  Though I do all ♥ their shoes! 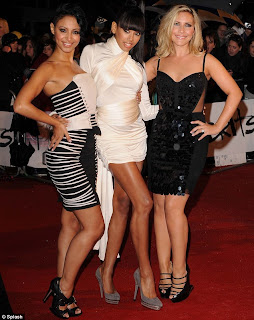 Sugababes..nice shoes - shame about the dresses ladies!
Cat Deeley wore Jimmy Choo heels..and apart from that I wasn't that much interested in what she wore!  The dress is a little blah for me..not very memorable is it? Having said that, Alesha's dress wasn't exactly jaw-dropping either.  It's another D&G number, though I quite like the length of the mini-dress and the dark grey sparkling colour makes a change from the boring black that dominated the red carpet this year at the BRITS.  Thank goodness for Lady Gaga!

Alesha & Cat
Posted by DoYouNoah at 14:35
Email ThisBlogThis!Share to TwitterShare to FacebookShare to Pinterest
Labels: celeb fashion, fashion, the brits 2010