It was the ELLE style awards last night one of my favourite style events because all the celebs are always dressed to impress.  Plus there is a nice mix of both UK and US stars present :-)
Held in London's Connaught Rooms, the event hosted the best dressed people of the year.  That's a hard one, but personally, for 2009, my best dressed list would be (in no particular order!) Alexa Chung, Olivia Palermo, Nicola Roberts, Alexandra Burke and Lauren Conrad in my top 5...who would you choose? 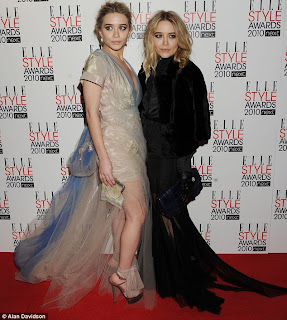 Olsen Twins
Ashley wore a white/blue Christian Lacroix dress and Mary-Kate chose black.  Usually, I prefer Ashley Olsen out of the two but I really liked Mary-Kate's Gothic Lanvin gown and the fur shrug finished off the outfit perfectly :-)


Pregnant Dannii looked glowing in her canary yellow Grecian dress by Lisa Ho..she hid the bump well!  Kylie opted for the classic LBD by YSL with a plunging neckline to give it a twist. 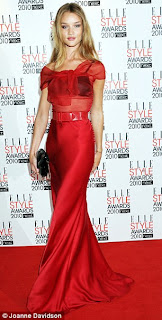 Rosie Huntington-Whiteley and Claudia Schiffer
Claudia kept it boring simple in a Emma Cook black dress. Rosie, the Victoria's Secret model, wore a pretty red Christion Dior dress. Is it me, or is there something quite odd looking about that girl?!

Naomi and Agyness
The British models wore UK designers on the night.  Naomi chose a Alexandra McQueen dress while Agyness wore a Henry Holland LBD with fluffy blue strips...hmmmm on that one Agy!


Olivia wore a Matthew Williamson dress..not keen on the studded belt..makes the outfit look too busy but it's Olivia she always looks nice she can get away with it!  Editor's choice winner (and rightly so!), Alexa, wore a georgous blue Chanel tea dress. A tad bit grannish but check the shoes..and the bag *sigh*  Alexa can make a granny dress look decent - the girl never puts a foot wrong!


Claire wore a boring black Burberry dress...come on love its a STYLE awards event not a frigging funeral!  Corinne didn't do much better, she wore a hideous Diane Von Furstenberg jumpsuit..the length, the drapes and the fringing was just NOT DOING it for her. :-(