Hand's up who likes KFC? Well, there in BIGGGGGG trouble after the Australian arm had to withdraw a TV advert because of its racist tone.

We all know how popular Cricket is in Australia and im sure the makers of KFC do as well, hence their decision to base the advert on cricket.

Fair enough, you might say. So how does KFC and cricket equal racism?

Well, those chickenheads over at KFC decided to show a white cricket fan trying to "calm down" a rowdy group of West Indian Cricket fans by handing out, wait for it, FRIED CHICKEN.

The best thing about the internet, is that news travels fast. Even if the advert was broadcast in space, we would still be able to know about it thanks to outlets like youtube!  So when American news got hold of this story, it spread like wildfire and justly so.

Here we go again...another global organisation reinforcing derogatory racial sterotypes of black people:- that they are ROWDY and the only way to calm them down is to give them CHICKEN.

This has been the SECOND time within THREE months, that Austrailian media has decided to broadcast RACIST images on TV.


The last, was when an entertainment show, thought it would be "entertaining" to blacken the faces of five white singers to impersonate the Jackson Five. This was broadcast in honour of Michael Jackson following his death.  What a fantastic way to "honour" the dead. NOT. 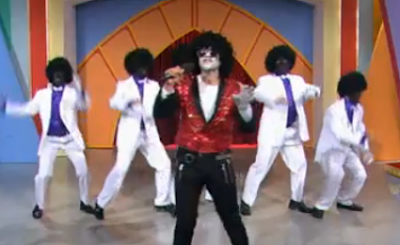 Does Australia need to re-evaluate their broadcasting laws? Where is their OFCOM? Who decides that blacked-up faces and racist overtones in adverts should be allowed on air?

As we all know, the Australian Media has a high concentration of media ownership, so perhaps the Australian government, Rupert Murdoch and John Fairfax Holdings should get together and review these poor, media guidelines that allow disgusting racism on their airwaves.

If you don't believe me check out the advert below!

Posted by DoYouNoah at 12:12
Email ThisBlogThis!Share to TwitterShare to FacebookShare to Pinterest
Labels: australia, KFC, racism